The Sovereign Group were contacted by Haig Housing who asked us if we could support a unique, first of its kind, major housing regeneration project in association with the BBC DIY SOS team. The epic project was to renovate an entire road in Manchester into 62 specially adapted and bespoke homes for ex-service personnel.

During the 2 week project, Princes William and Harry attended to lend a hand and provide a royal seal of approval on this unique ‘homes for veterans’ project. Upon completion, Nick Knowles contacted Sovereign to thank us for all the support and specifically commented “how amazed he was with our products and service.” 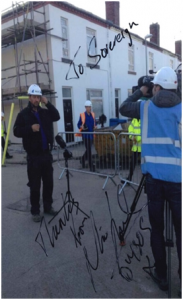 I would like to start with a big THANK YOU from everybody at ISG for the extremely valuable support you provided for the DIY SOS Veteran’s Special.

Our thanks can be added to the many testimonials received on the project, particularly from the BBC’s Nick Knowles and his team, who emphasised the importance of your support on the BBC shows. Manchester City Council, Haig Housing and Walking With the Wounded (WWTW) have also expressed their thanks. There is no doubt – we could not have done it without you.

Ed Parker, CEO for WWTW, sent us the note below which sums up your considerable contribution to the project nicely:

“The last few months in Manchester have been a whirlwind and I am very humbled by the support we have received. You guys have made such a huge difference to people’s lives. Our job is now to maintain that momentum.”

Your generosity of time and materials was crucial to the success of this massive project, the BBC’s biggest ever Big Build, and your contributions to the fundraising for WWTW will help the charity in firmly establishing their North West base. We look forward to continuing to work with you in the future.”

Read More Case Studies
We would like to complement Sovereign on their continued use of these products and promoting them within their door range.
- Justin Harris, Commercial Director Winkhaus
Sovereign’s have an exceptional and well-deserved reputation as a manufacturer and installer of high quality doors and windows which has been built over many years.
- Chantel Roach, Marketing Director Distinction Doors
Sovereign’s commitment to creating high quality windows and doors for projects around the UK make them an ideal partner.
- Colin Torley, Sales & Marketing Director Veka
Together, we have succeeded in providing Developers/ Local Authorities, Housing Associations, Schools and Universities with true ‘value for money’ product solutions...
- DANE DUFFY, Sales & Marketing Director Brookvent
Based on strong relationships and a shared common belief in great customer service, both organisations have developed into leading brands within the UK glass industry...
- DAWN OFFLAND, Joint Managing Director Float Glass Industries Ltd
We consider it an asset to be associated with one of the pioneers of the fenestration sectors, who after 45 years, still remain a market leader.
- KEVIN WHITING, Managing Director Maco
Dedicated Manufacturer & Installer

A dedicated manufacturer and installer of windows and doors, Sovereign Group has a highly trained team of experienced professionals, who can advise on the best solutions to suit client requirements.